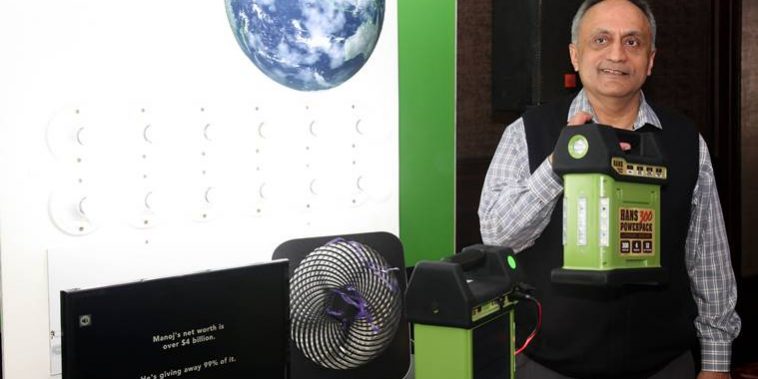 On August 15, 2015, Prime Minister Narendra Modi made a promise to the nation. Speaking from the Red Fort, the PM had said 18,500 villages, which till then had no access to electricity, will be electrified within 1000 days. This Independence Day, he said that more than 14,000 of these villages have been electrified.

Fun fact: It requires only ten percent homes to have a legal electricity connection for the entire village to be deemed electrified.

As per Ministry of Power statistics, 43 million households in the nation are still deprived of electricity. If the electrification process continues at the current rate of 2 lakh households per month, it will take nearly 20 years to electrify the existing unelectrified households. The NITI Ayog, in a recent report, had also taken note of the fact that the government’s rural electrification drive has not improved the situation “appreciably” as nearly 304 million Indians still do not have access to electricity.

This is where Indian American billionaire Manoj Bhargava, the man who shot to fame with his Five Hour energy drink, could come into the picture. Bhargava, who has pledged 99 percent of his fortune to funding the development and delivery of solutions to solve the world’s most pressing problems, on Tuesday offered a peek inside his invention lab where his team is working on everything from devices that create fresh water to affordable pollution-free electricity generators and even farming techniques that enhance crop yields.

“Electricity is a great enabler,” says Bhargava. “It opens all sorts of opportunities related to education, income, entrepreneurship, communication.” And yet, nearly half the world still only gets power 2-3 hours per day,” says the Princeton dropout, who made it to the Forbes list of the richest Indians in America in 2012. Bhargava feels that mobile electricity is the only answer to power crisis and also the only viable option for rural Indians. “Mobile electricity could change things like mobile phones did,” Bhargava told indianexpress.com.

His team has engineered a solar-powered PowerPack which includes a spotlight and room lighting, a USB port, and a 12-volt outlet for running small electronics. It can also be plugged into a regular wall socket and charged off the grid. For those who receive electricity 2-3 hours a day, the PowerPack can be charged when the utility is sending power, and then used during outage periods. It also works in combo with the Solar Briefcase, a lightweight, portable, and simple-to-use set of solar panels designed for charging the Power Pack from virtually anywhere on Earth.

The 300-watt PowerPack received considerable interest from Uttarakhand government and CM Trivendra Singh Rawat. On October 8, 2017, the government of Uttarakhand committed to obtaining 100,000 PowerPacks to provide to villages in need in order to give them a free and permanent source of electricity. The state has more than 60 villages where electrification has not yet been done due to geographical challenges.

The Power Pack is priced at Rs 14,500, which is a big amount for the rural Indian. “We are trying to provide it at zero profit but we don’t want to deliver a substandard product and this is why we have kept the price at Rs 14,500, which I admit is huge for the poor to pay but to think about the brighter side, they won’t have to pay their electricity bill for the next 12 years,” adds Bhargava. He adds that with the Hans Power Pack and Hand Solar Briefcase, a rural household can meet all of its electricity needs and never receive a utility bill.

Bhargava is also working with his team to find ways to make clean water available to rural Indians. His lab has developed two new RainMaker machines for the billions of people who either lack access to safe drinking water or live in areas threatened by shrinking water supplies.

Another area of public interest that the billionaire and his team have been working on, is the development of a cost-free alternative to urea. The fertiliser can easily be made within 18 days using whatever is laying around the farm—dry materials, fresh grass, crop residues, animal manure. “The results are stunning. Farmers are seeing higher yields, they’re getting higher quality produce, they’re using less pesticide and less water, their kids are healthier because they’re eating more nutritious food,” claims Bhargava.

Bhargava is hopeful that the Union government would support him in his mission but admits that India is a difficult nation to do business. His team of trainers has been training people in the villages of Sikkim about their products and how to make the most of them and they plan to spread out to the entire country. “We are taking one step at a time, right now we need to focus on Uttarakhand and meet their demand for 100,000 units. It’s a long way to go.”